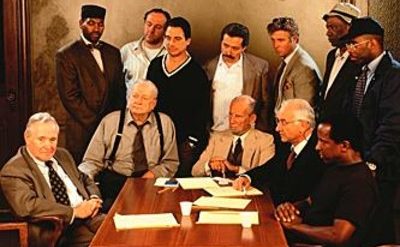 Don’t you wish you could see a real-life demonstration of therapy?

The process of counselling and therapy is hardly an exact science. You can make goals and predictions and work towards them but it isn’t straightforward.

Therapy works. But no matter the leaps and bounds in neuroscience over the past couple of decades, it is still challenging to explain it in a simple and compelling way.

Whether you are a fan or not, you can see why The Biggest Loser is compelling viewing. The workouts, the pain, the eating, the emotions, the drastic change in body shape right before your eyes. If only therapeutic gains could somehow be witnessed in the same way that weight loss can. If only we watch a counselling and therapy demonstration.

I am not hoping for a therapy version of Biggest Loser. I am however always on the look out for new insights and ways of talking and writing about therapy. This time an old movie was my inspiration.

A big claim but I reckon this 1997 remake of a classic film is as compelling a demo as any, of how therapy can bring about significant change!

I was in the video store recently, staring helplessly at the shelves, close to giving up on finding something that interested me. Then I spied the classics shelf and grabbed one – 12 Angry Men – which I had not seen before. Critically acclaimed, stellar cast, courtroom drama (or jury deliberation room actually), can’t go wrong.

Jackpot! What a gem – good film all round but it also convincingly answers some age-old, nagging questions associated with therapy:

Yes it is only a movie but it does demonstrate right before your eyes, the power of talking and expression, the inescapable relevance of the past and how people change in the way they feel and behave.

I know it sounds like a stretch but the film offers a real insight into the positive change that therapy can achieve. And while it is not showcasing therapy, it is set in a room where people sit, talk, think, feel. The characters need resolution and must contend with conflict, confusion and high emotion.

Many elements in common with the process of therapy.

You get to see a variety of coping strategies employed by the characters. Humour, distraction, silence, retreat, attack. And you see them change. Just like therapy.

There are moments of challenge and confrontation, as well as support and understanding. Their relating and relationships change. Perspectives and self-awareness shift.

Prejudices and motives emerge, pain and catharsis are experienced. Vulnerabilities are exposed and with some of the characters, you can see these vulnerabilities transform into strength before your very eyes.

A Critical Element of Therapy is Brought to Life

At the beginning of the film, 11 jurors believe the accused to be guilty. The twelfth has reasonable doubt. The numbers change and change again until the final resolution comes at the end of the film.

The characters are forced from the comfort of their self-assured, black-and-white views to an uncomfortable place of doubt and grey. Yet while lack of certainty is painfully challenging it is also phenomenally productive.

I have never been great at explaining the value of being able to tolerate or ‘sit with’ uncertainty – the grey and insecurity of limbo. It is much easier to try to avoid uncomfortable feelings or difficult decisions. Or to jump to an impulsive conclusion and act quickly to smash any doubt.

Confronting a messy, fuzzy reality is valuable and 12 Angry Men illustrates this beautifully. By letting go of a too easy, black-and-white view point, and grappling to get to a resolution, they arrive somewhere new and it is literally life saving. Hard work but utterly satisfying.

A thoughtful and thought provoking movie. And the next best thing to a therapy demonstration.

How People End Up Getting Counselling – 4 Common Triggers

The False Promise of Positive Thinking